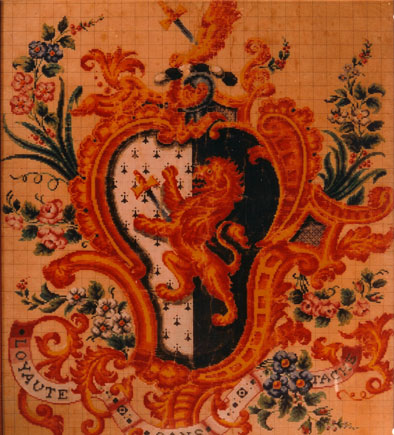 In my extended families possession is a centuries old tapestry depicting a coat of arms described by the blazon:

“Per Pale Ermine and Sable a Lion Rampant Or holding in the paws a Cross patty fitchy of the last.”

Initially I had no idea whether the tapestry depicted a coat of arms for a strudwick ancestor, or perhaps of the family of a strudwick wife, or were just an ornamental heirloom.

It did seem likely however, that if I could identify the arms and who they were granted too, it might help in my genealogy research.

As a result I have undertaken extensive searches and queries looking for any details for Strudwick in grants of arms, visitations and miscellaneous documents.

Some of the sources searched by me, or others on my behalf include: 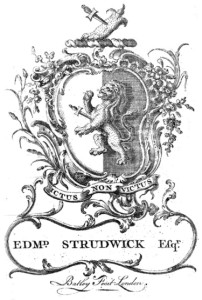 The Visitations of Sussex

The Visitations of Surrey.

The Harleian Society’s Grantees of Arms

Humphery-Smith’s ‘Armigerous Ancestors’ (an index of the visitation pedigrees)

The DBA for the medieval period

While I did find several references to Strudwick’s who had married into armigerous families, it was only in Papworth’s ordinary of British Arms that I found an entry dircetly relevant to my search.

This was an entry for the family name STRUDWICK, and the blazon closely matches the arms in the tapestry. “Per Pale Ermine and Sable a Lion Rampant Or holding in the paws a Cross patty fitchy of the last.”

Unfortunately, the entry is not one for which Papworth’s source appears as a reference in the preface, so no visitation is pointed to. However finding the entry did at least provide some further backing to the assumption the tapestry depicted a family connection to an armigerous Strudwick ancestor,(or one who claimed to be armigerous).

Apart from Papworth’s entry, and the tapestry, the only other likelyStrudwick references to arms I have found are:

The following entry for Warrington of Lancashire paraphrased from the 1847 edition of Burke’s Landed Gentry; THE REV. GEORGE WARRINGTON, rector of Pleasley, co. Derby, and vicar of Hope, co. Flint, 6. in 1744, was canon of St. Asaph in 1822. He married Mary Strudwyck in 1768. By this lady (who was b. in 1740, and d. in 1802) the Rev. George Warrington had issue. Mary was the only daughter and heir of Henry Strudwyck, Esq., (by Mary Hanmer his wife), and the granddaughter of Henry Strudwyck, Esq., (by Theodosia Broughton, his wife, eldest dau. and heir of Edward Broughton, Esq. of Marchwell Hall, co. Denhigh) Mary Hanmer, the mother of Mary, was the daughter and heir of Rees Hanmer, Esq. of Pentrepant. Henry Strudwick, the husband of Mary Hanmer was the son of Henry Strudwyck, Esq., who being a Protestant, left France on the revocation of the Edict of Nantes, in 1685. Note: It has been discovered that Henry did not marry Theodesia Broughton, as mentioned above, but in fact was married to her younger sister, Mary Broughton.

William Strudwick, Mayor of Chichester 1622, for whom several documents have been located that are closed with a ‘seal of Arms’ ie Indenture of lease by William Strudwick the elder, Mayor of Chichester (1) to Edmund Bartholomew the elder of Donnington, husbandman (2) 24 March 1616 For £5 – of 1 hilf of arable or pasture land lying in the common field called the Horseland in Donnington, the south end adjoining Donnington Marsh, the north end next Kingsham land, the east side adjoining John Langredge’s land and on the west side a hilf of John Shellie’s land, the term of the least being for 1000 years and the rent of one penny yearly. Signature: Wm. Strudwicke and armorial seal. Witnesses: Thomas Wright, Ralf Strudwicke.REFERENCE: HARRIS/138 . This ‘seal of arms’ however may not have been personal arms, but could have been the arms of the office of Mayor.(See Will)

7 September 1740 Dieppe :Letter: Henry Strudwick to Francis Price “I set out for Dover, from whence we hired a ship to Calais, and having a calm when 20 hours at sea. At Calais we found my father, who (I had acquainted with my design of seeing France) came to meet us and gave us a kind invitation to his house here, which we accepted, and have been here ever since. My father has endeavoured to make this place as agreeable to us as possible by introducing us to all the people of fashion here, some of whom are persons of great distinction, by whom we have been elegantly entertained. The ladies are extremely fond of and polite to my dear Mr. Strudwick.” [Seal of arms] Source: National Library of Wales MSS 3561BB-88E, 6704: RCHM xliii 322 Title: Puleston Manuscripts (Thanks to Garry Strudwick Sunstruck Forest for this reference)

William Strudwick, Citizen Grocer &Clothworker of Cheapside 1652/3-1699, who married Jane Knightley of Fawsley. William mentioned in his will a Seal for his receipt book with both he, and his wifes, individual arms engraved upon it. He also mentioned his ring with a seal of a Lions Paw. Jane Knightley is listed in the Visitation of Northamptonshire 1681 but this was prior to her marriage in1683. (See Will)

This entry also relates to the same William as the last on and reinforces him as the most likely contender: “Mr: Wm: Strudwick, Groscer” is listed in Holborn-Cross Precinct of Farringdon Ward Without: Parish of St Sepulchre in a return endorsed with the date 2 March 1687 (College of Arms, Phiipps Ms 13084, vol. 10, pp 129-135). Source: “The Visitation of London begun in 1687”, Part 2, page 622, Harleian Society, London, 2004. The return is one of those prepared under instructions from the Aldermen by the Beadles of each ward listing all the baronets, knights, esquires, gentlemen or “reputed gentlemen” and all other persons in their ward who used armorial bearings. These returns were delivered to Sir Henry St George to form the basis for his own lists of individuals to be summoned to appear before him at the Visitation. Few of those listed in the returns recorded pedigrees at the Visitation but this is presumably because the surviving returns owe their existence to having been retained until the wards in question were visited – and only about half the City was.

So it would appear this last Mr William Studwick may be the armigerous ancestor or claimed that status but was probably never in the event called to give evidence.

This William Strudwick died in 1699, and if the family tapestry has a direct link back to him, then it targets my own family history research. I currently can trace my own line backwards to a birth in c1760, which leaves a gap of probably two generations still to explore.

If the link exists between my own line and William the Grocer, it will confirm the tapestries history, if not the authenticity of the arms it bears.

If the link does not exist, I will need to continue the search for the source of Papworths entry, and the origins of my family heirloom. To be continued

Having now found further details surrounding the origins of the arms, and possibly Papworth’s entry, I can now continue the relating of my search. I had considered rewriting this whole page, but felt that the other leads and paths may be as valuable to others as the final answers discovered.

Recently I came across an entry in Burkes General Armory of England Ireland Scotland and Wales relating to the family of Warrington, mentioned in the first extract above. It related to the son of Reverend George Warrington and Mary Strudwicke, George Henry Warrington, who married the heiress of Carew, of Carew Castle and Crowcombe, and assumed by royal licence in 1811, the surname of Carew only.

It described the arms of his father George Warrington as “Per Chev, Or and Az, three lions ramp, counterchanged, Quartering for STRUDWICKE, per Pale Erm and Sa, a Lion Ramp, Or, Holding in the paws a cross pattee fitcjhee of the last”. The quartering of arms is symbolic of the joining of two armigerous families by marriage.

This description of the quarter, matches both the blazon in Papworth, and the image woven into the tapestry being researched. Whilst Burke is not a source that can be relied on to authenticate that a grant of arms was made to Strudwicke, it does formerly identify the branch of the family that claimed the arms as their own.

This was quite a breakthrough as I had already collected a great deal of the tree that descended to the Warrington branch, and connected this also to the Jamaican and North Carolina, USA branch. I had only to identify where my own branch may have connected in, in the knowledge that the arms depicted on the family heirloom was clearly related to this same branch.

The link was found by tracing back to the marriage of Mary Broughton and Henry Strudwicke in 1714. They had three sons, Henry, Edward and William. Henry went on to marry Mary Hanmer of Pantrepant in 1740, and is the Henry mentioned in the third entry above. Henry had one daughter, Mary, but then left his wife and settled in Jamaica. Here he had further issue, and many Strudwick family descend from this line. His brother Edward also travelled to Jamaica, but died within a year of his arrival.

The third son William, is my ancestor, and I am still seeking further information on his life. He was born in 1721, and baptised, like his siblings, at St Andrews, Holborn. I am still researching he and his brothers lives, and have found much of interest. His father Henry, was excluded from his mother in law’s will, which left a considerable legacy to Henry’s wife Mary Broughton, and he fought in the courts for many years to access her parents legacy. The court documents are fascinating. He filed for divorce from his wife, and during her life, and following her death, continued to fight for a share of her fortune. In the end the Broughton legacy passed to the three sons, and Henry, the father, died with few assets in the mid 1700’s.

I have a number of documents relating to the many court cases and will add these to the site as they are transcribed. They are listed in the National Archive section of the Sundry page, and transcriptions are identified by the links that appear.

There are still many avenues of research to follow, and documents to obtain, to more fully understand the many branches that descend from Henry Strudwyck, Esq., who being a Protestant, left France on the revocation of the Edict of Nantes, in 1685, as described in 1 above, and to delve further into the past to discover the origins of this Henry.

Note: The various branches so far traced can be explored on the Family Tree pages. There is little yet on the Jamaican descendants of this line, and so any contribution would be appreciated. I am aware that UK TV chef Ainsley Harriot is a descendant of this line, and his family ancestry was documented on a television special on DNA in ancestral research. The USA (North Carolina) branch has been well documented and includes several notable figures, particularly in the fields of medicine and politics.