One may obtain a rough estimate of the distribution of Strudwicks and the variations of the name in the United Kingdom, using the data on births in the IGI. At the time of collating this information there were 2075 Strudwick and variant births in the UK IGI that had valid birth or baptism dates, and valid location details after careful filtering.

Many variations of the name appear, however these can be divided into the most common variants, and this was done to provide some details of name evolution.

Of 2069 names, Strudwick was the most common, comprising 1404, this was followed by Stredwick,292 then Strudwicke,195 with Stradwick listed 80 times and Stridwick 46.

It is also interesting to look at the locations where these names occur over time, to see how the name has evolved or spread.

This image shows the Strudwick birth locations up to 1800

The following images show the distribution over various periods of time by listing the births recorded in the International Genealogical Indexes for the UK.

This next shows the Strudwick births recorded across the UK between 1600 and 1650.

I was quite surprised by the prevalence of the Stredwick variant in the County of Kent. Interestingly also, the earliest records, predominately in Sussex, use the Strudwick type variant, and this form has persisted strongly in this area.

This next image shows the spread of IGI Strudwick Births across the UK between 1650 and 1700.

This image shows all Strudwick births in the UK IGI

These figures are based on Strudwick and variant births in the IGI that have a correctly formed date, and batch number identifying a parish to try to exclude extraneous contributions. A total of 2075 Strudwick births met this criteria in the IGI as at June 2005. (It should be noted that the spelling of names in the IGI may not always reflect the original records)

Map of locations of Strudwick/Strudwicke in 1881 England Census 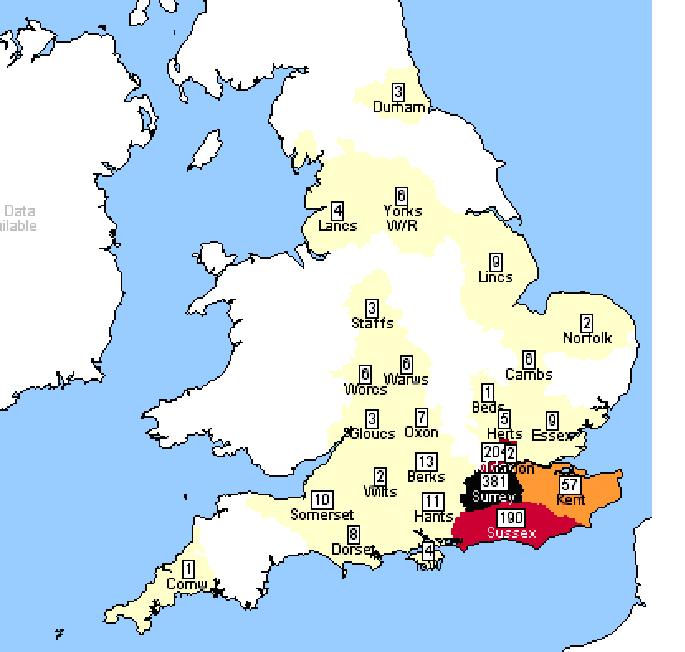